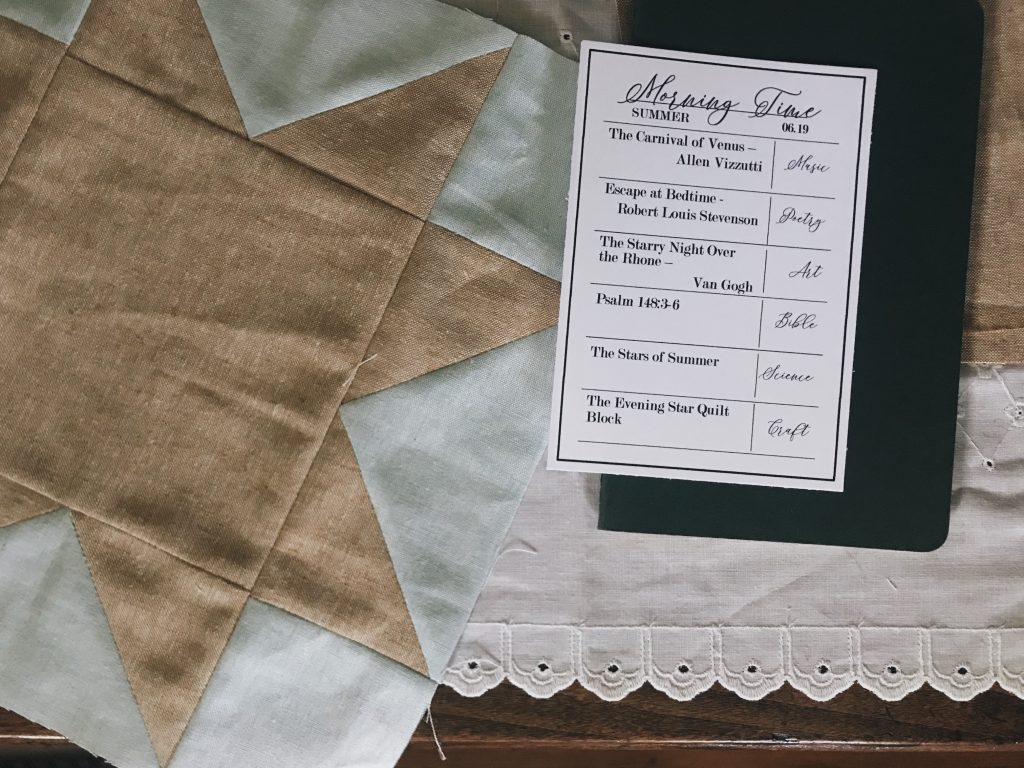 Last night our family finished reading Bound for Oregon by Jean Van Leeuwen. This fictional story (based on the life of a real girl) documents the adventures one young girl faced as her family traveled from Arkansas bound for Oregon. Originally we were drawn to this story for a couple of reasons: one being that her family was from an area in Arkansas close to our home and the other because we were excited to dig into a part of history we have never studied, the Oregon Trail. We loved this book. It made us really consider the hardships that the families that made this trek had to endure and it showed us that determination, steadfastness, and simply pressing on, even in tough times, are good qualities to have. We got so much from this book, including one thing I wasn’t expecting, the inspiration for this months morning time bundle.

As we followed Mary Ellen Todd’s story one theme that kept being repeated was how, despite her grandmother staying behind in Arkansas, she still felt a connection to her through a quilt she had made as well as the process of making quilt blocks. She also talked often of the night sky and how she would gaze at it after a tough or terrifying day on the trail. These two things often brought her comfort.

“Look, girls,” he said, pointing. “There is Sirius, the brightest star in the heavens. And near it, do you see four stars close together? That is Orion, the Hunter.”

“I see it! cried Louvina excitedly. “I see the brightest star.”

As I looked where Father’s finger was pointing, it seemed to me that the stars had moved closer. And that they were watching over us…….

I pulled Grandma’s quilt close around me, thinking of her fingers darting in and out, making all the hundreds of tiny stitches that held it together.

I am irresistibly drawn to quilting, it is a passion I have put aside for a time, but will hopefully pick up again some day. So any chance I have to weave sewing and quilt work into our learning I will normally take it up. My sewing machine has been packed away for some time now, but it felt really good to bring it back out. I think that is the beauty of these plans. Hopefully, as we introduce more and more things to our children, they too will find things that they love and enjoy. And hopefully these will be things that will one day help them remember home. 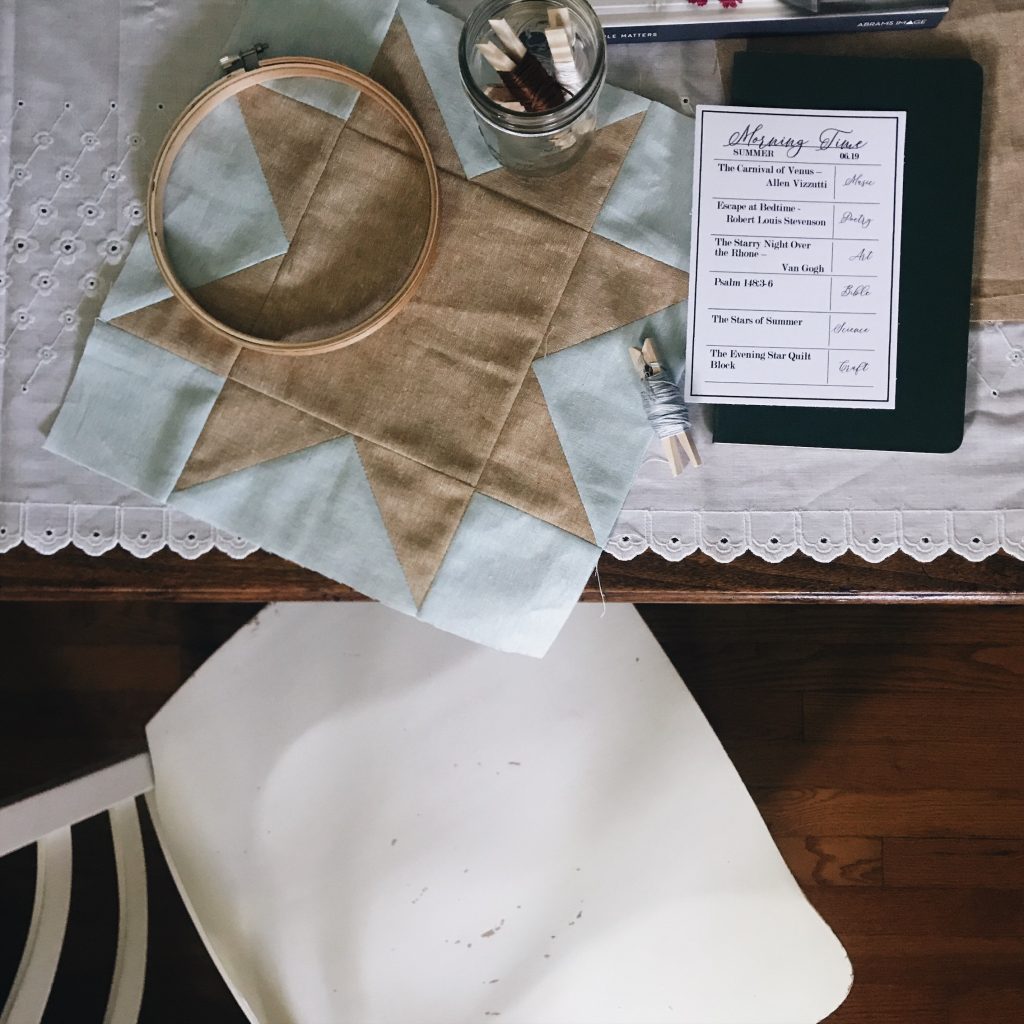 To kick off our star theme we will be going with a selection called  The Carnival of Venus by Allen Vizzutti. This composition has really grown on me over the past few weeks. It has moments that are still and solemn, followed by fun and frolics. It is composed and played by a modern day composer named Allen Vizzutti. Mr. Vizzutti was raised in Montana and learned to play the trumpet from his father. He is an amazingly talented trumpeter and this piece highlights that skill incredibly. You can read more about him here.

Once again, we will be studying a poem found in A Child’s Garden of Verses by Robert Louis Stevenson. This touches on some of the constellations that can be found in the sky. If you would like to dig a little deeper in this months study, this would be a great place to start.

The lights from the parlor and kitchen shone out

Through the blinds and the windows and bars;

And high overhead and all moving about,

There were thousands of millions of stars.

There ne’er were such thousands of leaves on a tree,

Nor of people in church or the park,

As the crowds of the stars that looked down upon me,

And that glittered and winked in the dark.

The Dog, and The Plough, and The Hunter, and all,

And the star of the sailor and Mars,

These shown in the sky, and the pail by the wall

Would be half full of water and stars.

They saw me at last, and they chased me with cries,

And they soon had me packed into bed;

But the glory kept shining and bright in my eyes

And the stars going round in my head. 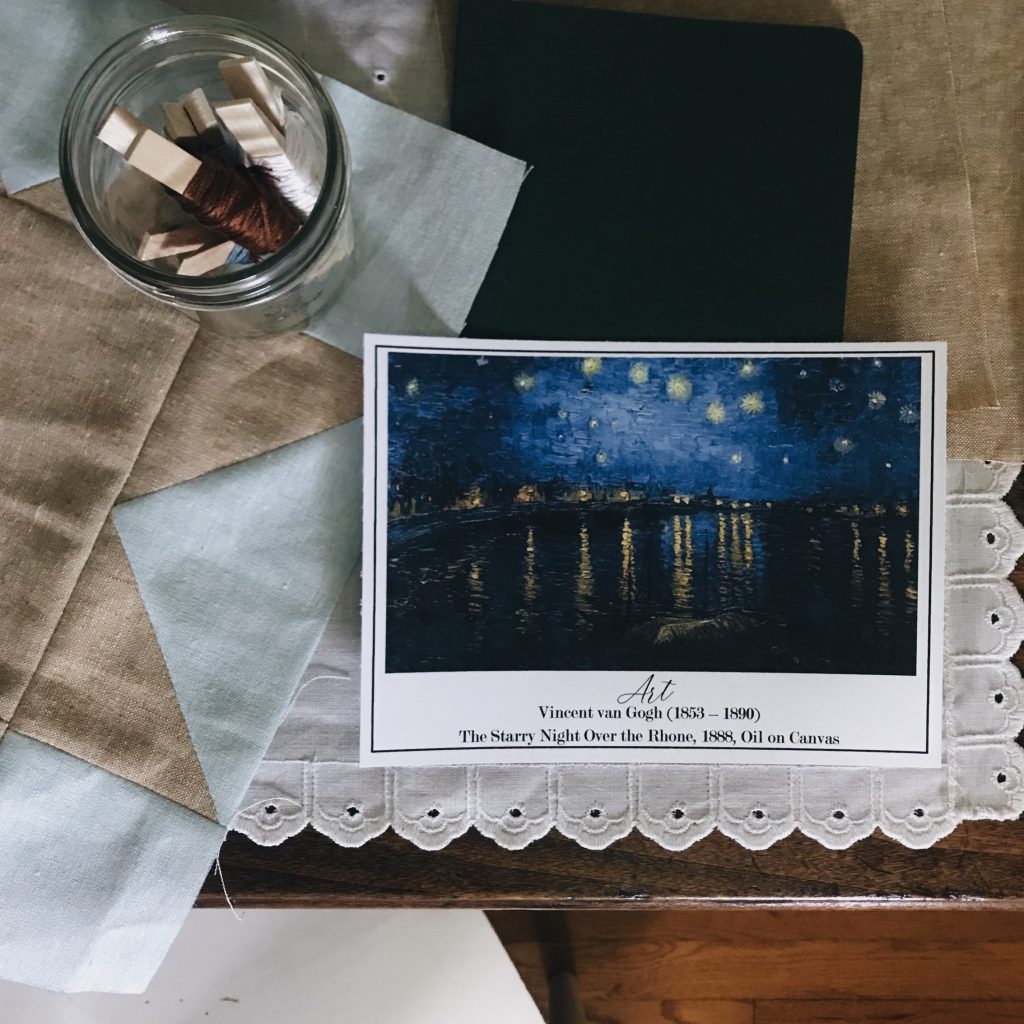 The scripture selection this month is a great reminder for us and our children, that while it is fun to study the stars and constellations, it is also important that we give them their proper place. The Matthew Henry commentary on Psalms 148 stated it in such a powerful way, much better than I ever could,  that I thought it would be good to share it here:

“There are the sun, moon, and stars, which continually, either day or night, present themselves to our view, as looking-glasses, in which we may see a faint shadow of the glory of him that is the Father of lights. The greater lights, the sun and moon, are not too great, too bright, to praise him; and the praises of the less lights, the stars, shall not be slighted. Idolaters made the sun, moon, and stars, their gods, and praised them, worshipping and serving the creature, because it is seen, more than the Creator, because he is not seen; but we, who worship the true God only, make them our fellow-worshippers, and call upon them to praise him with us.”

Anna Comstock, in The Handbook of Nature Study mentions that in a world full of change, the stars give the comfort of abidingness echoing the sentiment that Mary Ellen Todd must have felt in our story. This month we will be learning to identify some of the stars in the summer sky, primarily using pages 829-833 in The Handbook of Nature Study, but for more direction reading pages 815-822 will also be very helpful. Ms. Comstock gives step by step instructions for mapping out the stars best seen in the last of May, June, and early July. We have some time to learn these, so don’t feel like you have to confine it to one month. There are a lot of resources that can help us locate these, I will list them in the additional resources section, but non compare to actually going outside and observing them with your own eyes. Make sure to do that! 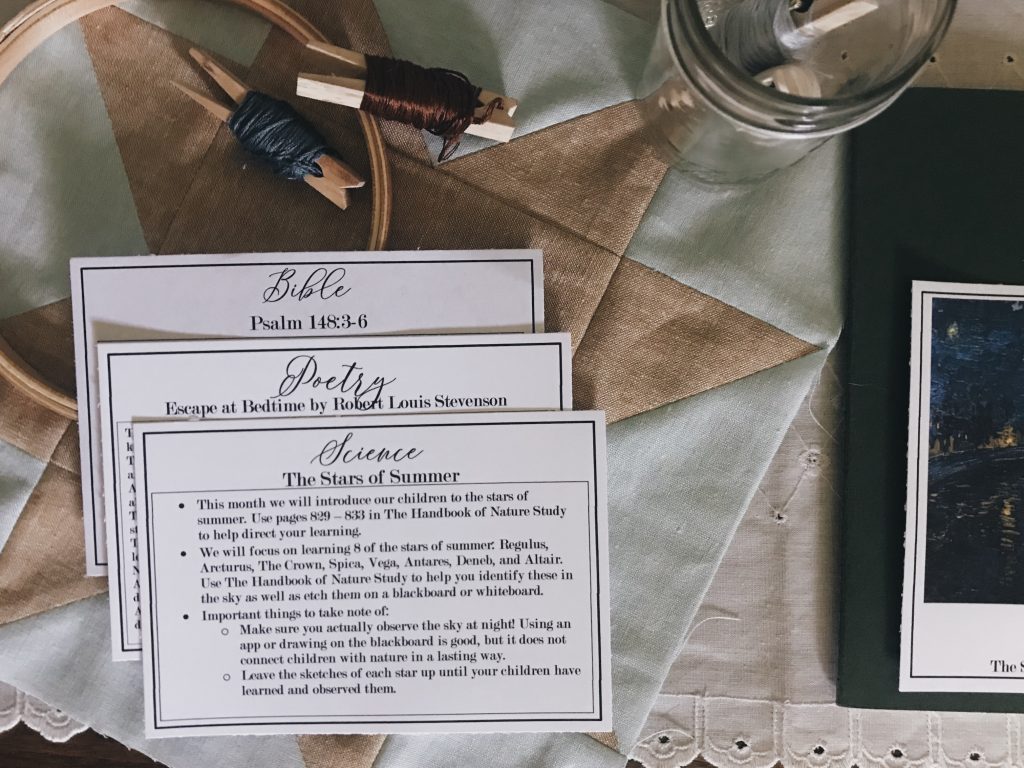 This month we will work together to learn how to make a quilt block. This block has many names: the sawtooth star, the evening star, and the north star so it just felt right to include it in this bundle. I made one with my sewing machine so that I could try the pattern, but cut 3 more that I would really like for my children and I to work on hand stitching (unless they want to try the machine). To make this block I followed this tutorial from The Seasoned Homemaker. Her instructions were clear and I loved the way she included a “penned stripe” on the fabric for you to follow with your sewing machine. I think this will be a very beneficial visual for our children to follow (either on the sewing machine or by hand).

If you aren’t comfortable with a sewing machine, if your children are too young to try hand stitching, or if you aren’t interested in working with  fabric here are some other options:

The civics portion this month came pretty easy, as what would be more fitting than to learn our national anthem and the symbols that represent it. This month we will focus on learning the Star Spangled Banner. The Smithsonian has a fun, interactive section titled The Star Spangled Banner  on their website that we will use to help us learn the history behind the war, the flag, and the song that has now become an emblem of our country. 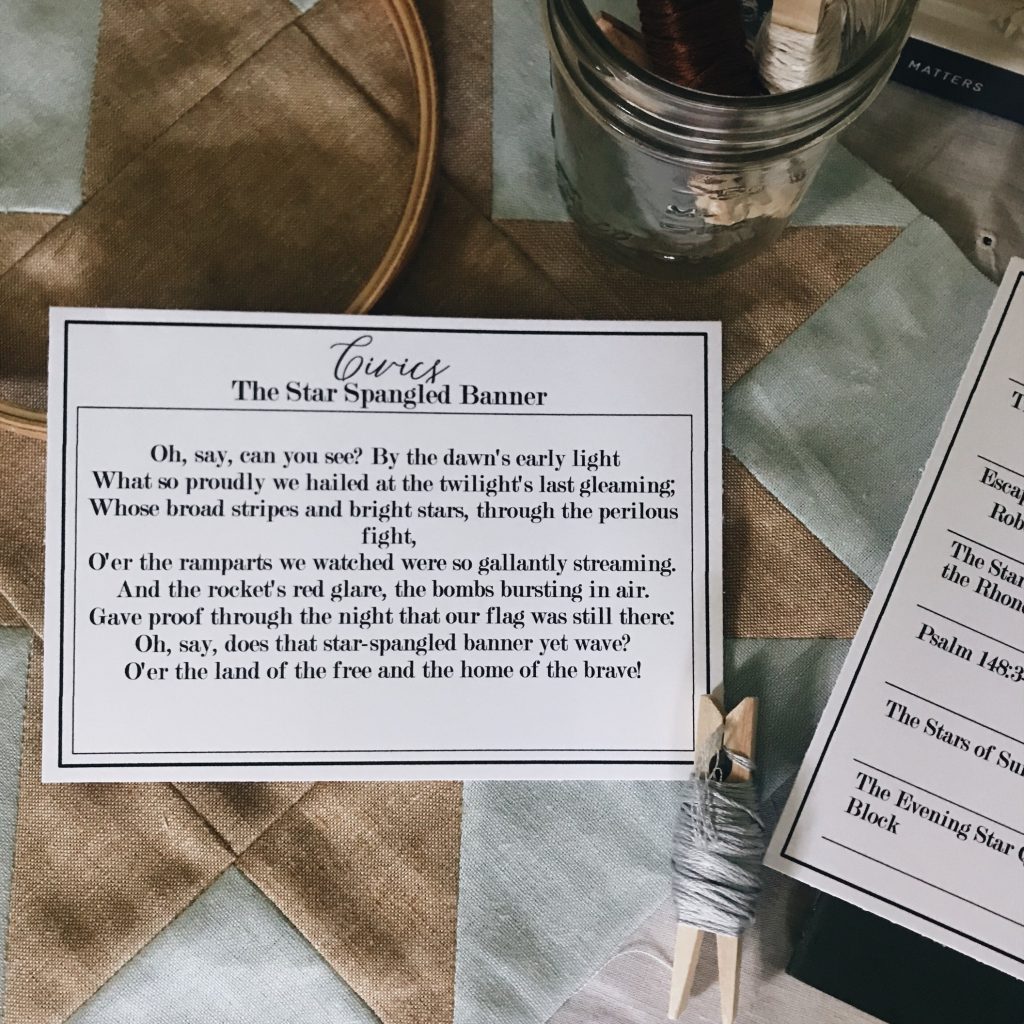 I Sing the Mighty Power of God with Happy Hymnody  this one fits amazingly well with this months study! I hope you will include it. They haven’t posted this months blog yet, so I am linking to their blog home page. Hopefully, when it is posted, you will find it here.

The Stars by H.A. Rey

Find the Constellations by H.A. Rey

A Child’s Introduction to the Night Sky

Papa and the Pioneer Quilt by Jean Van Leeuwen

This months feels like one that will stretch me as I learn to do things I have never done before such as identifying stars and constellations. Maybe you feel the same way, or maybe the thought of completing a quilt block makes you nervous. Let’s give these things a chance, together. I am sure in the end we will be glad we did. Happy Summer, Friends!

**Please note: this post has links to products on Amazon. As an Amazon Associate I earn for qualifying purchases.**

free goodies straight to your inbox 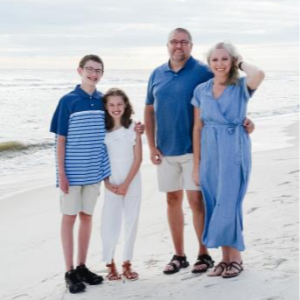 My name is Angie. I am the wife, mother, educator, and friend behind Fresh Wanderings. I love slow, simple days spent at home where I can be found creating, gardening, baking, educating our children, and spending time in God's Word. Welcome to the place where all of these things culminate into one.

Stay up to date

All of the Christmas decorat

Spending some time today just basking in the warmt

Some of my favorite corners and holiday things. Th

I dusted off my neglected blog this morning to sha

We completely switched things up this year and hav

Spending some time today just basking in the warmt

Some of my favorite corners and holiday things. Th

I dusted off my neglected blog this morning to sha

We completely switched things up this year and hav

This summer we learned that my dad has ALS. ALS is